Catch Collection Mellow - infused with a taste of rhubarb

Catch Collection continues to push the boundaries of taste. The new taste variety, Mellow, is probably the first snuff in the world with a taste of rhubarb. 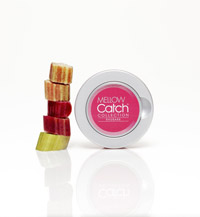 Catch Collection was introduced last year and was a prompt success. This year is the concept even more innovative when it comes to taste, design, and color. The snus change taste three times during the year and each taste is available only for a limited period of time. First out this year is Mellow.

“Many may raise their eyebrows when they hear snus and rhubarb in the same sentence, but with Catch Mellow we have really managed to produce a fresh snus giving spring-feelings under the lip,” says Robert Lundgren, product manager for Catch.

Catch Collection Mellow, will be available in shops from 1 February and remain so until week 20 when it is replaced by the next taste approach called Glow, with the taste of elderberry and lime. The third taste variety is called Ease and is flavored with ginger and orange.  The portion pouch boxes contains around 20 prillor and costs about 30 SEK.