Cricket gears up in the Philippines

Four miles outside Manila, the new plant where the popular Cricket lighter is manufactured was officially opened in May. The new lighter plant represents state-of-the-art production for Swedish Match Cricket lighters. 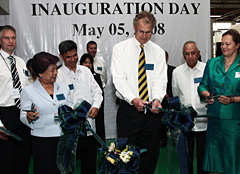 Jarl Uggla, President Swedish Match
International Division, cuts the ribbon
Manila in 38 degrees Celsius heat. Vic Bocaling welcomes his guests to the new plant in Laguna Techno Park, four miles outside Manila. Vic has been the Managing Director of Swedish Match in the Philippines since 1996 and is responsible for Swedish Match’s new plant, where the popular Cricket lighter is manufactured. The plant was completed at the end of December 2007 but was not officially opened until May 5 this year.

“Today, the new lighter plant represents the importance of having Cricket lighter production in Asia for Swedish Match.  The new plant in Laguna Technology Park also has good expansion possibilities. New production lines can be installed in the existing premises and the area will permit continued expansion of the plant. Cricket is ready to continue expansion,” explains Vic Bocaling.

“The production flow has been optimized and the processes automated, which produces more efficient production flows and a better work environment for the employees,” says Marcel Petersen, Swedish Match Philippines Manufacturing Director.

In 2006, it was established that the former plant in Manila was too small and an intense hunt for new premises with the right expansion possibilities was initiated. One of the requirements was that the new plant would be located in an area that would allow reasonable travel time for employees. This was an important consideration for Vic and his team, since retaining employees was extremely vital.

“We were able to retain all our employees in the plant, which contributed highly to the successful transfer and continued high efficiency of the new plant,” says Maribel Umali, Swedish Match Philippines Human Resource Manager.

In April 2007, Swedish Match purchased the new plant in Laguna Technology Park, at which other international companies such as Atlas Copco, Honda, Panasonic and Hitachi were established. It was a battle against time; in six months the new premises were to be customized and expanded. In addition, all equipment and production were to be transferred without interfering with delivery capacity.

With assistance from the lighter plant in Assen, Netherlands, production was planned so that delivery of Cricket lighters to primarily Asia and Russia would continue. All production equipment was installed by December 29 and one month later the new lighter plant in the Philippines had a production capacity of 80 percent of normal volume.

The opening ceremony was impressive. The plant was decorated in fantastic floral arrangements, the employees described the production process at the various stations in the plant and there was one opening speech after another on the expanded stage in the employees’ dining area.

Jarl Uggla, Vice President for International Division, presented a gift (if we have a photo of this) as a sign of the successful transfer and the team spirit that has developed over the years. Sweden’s ambassador to the Philippines, Inger Ultvedt, spoke about the significance of Swedish Match and products from Swedish companies in the Philippines. The Director General for the Philippine Economic Zone Authority, Lillia de Lima, a key government partner in the transfer process, also promised to continue to support the company’s operations in the Philippines.

The ceremony was characterized by enthusiasm and warmth, not only from the outdoor temperature but also from loyalty emanating from the Philippine management and employees of Swedish Match for the operations.