A new member of the popular General family is now being launched; a loose snus for those who want a strong tobacco flavor and more nicotine. 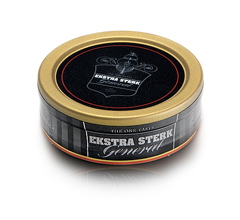 General is the preferred snus for Norwegian men, with a total market share of about 63 percent.

Cigarette smokers comprise the principal target group for snus. User surveys show that many smokers want a stronger snus in order to view it as an option. The increase in sales of previously launched products with high nicotine content also clearly indicates considerable demand for this type of product in the Norwegian market. These are the reasons for adding General Ekstra Sterk Loose to the range. The tobacco mixture is stronger in terms of nicotine, with a strength of 13 mg/g.

“We know that many consumers use and appreciate our portion-packed snus varieties, General Sterk and Ekstra Sterk, but they also want to combine this with a loose snus with the same aroma,” says Niklas Krohn.

General Ekstra Sterk Loose is available in stores in Norway from today.