Henry Ascher, pediatrician and associate professor at the Nordic School of Public Health in Gothenburg, received the 2008 Solstickan Award. He was awarded for having worked to ensure that all children who stay in Sweden, either permanently or temporarily, are treated in a manner that complies with the United Nations’ Convention on the Rights of Children. 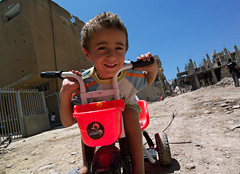 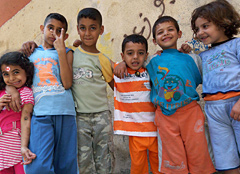 What does winning the award mean to you?

“Getting the award was a great encouragement and it confirmed that my work for vulnerable children in society is important and that it’s being highlighted. It’s a challenge getting politicians and decision- makers to realize how important asylum-seekers’ children’s right to health is, that it’s actually a human right. The award gave me renewed energy to go on working.”

Have there been any particular highlights during the year?

“Hosting a scientific seminar, the Solstickan Seminar, was inspiring. We gathered experts in the area; spokespeople from the UN, Save the Children and many youth psychologists took part. We had broad room for discussion on a controversial theme. We also gave a voice to those we’re actually aiming our efforts at; youths took part by speaking about their experiences of living on the run.”

To which organization did you send the prize money?

“The decision wasn’t easy. Many aid organizations already have good financing. The important thing for me was that Solstickan’s money would really make a difference to people living in vulnerable conditions. Palestinian children's health has always been a concern to me. The Al-Shifa clinic in the Palestinian refugee camp of Nahr El-Bared, in Lebanon, which received the donation, would not have been able to go on operating without this money. The money was enough for it to keep going for four months, and during that time fund raisers for 2009 were found.” 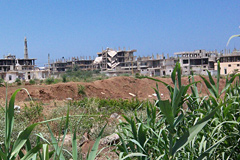 Nahr El-Bared, Lebanon. It is 35 degrees Celsius and the sun is burning ruthlessly over the camp, which holds about 40,000 Palestinian refugees. The refugee camp has existed since 1949, when the first Arab-Israeli War was in progress. The war led to many Palestinians fleeing or being driven away, and the state of Israel was founded.
Henry Ascher chose to send the Solstickan Award prize money to the Al-Shifa clinic, the only health clinic in the refugee camp. The two doctors practicing at the clinic receive a total of about 80 patients every day. The burden of their work is incessant and there is not much time to rest.

Ascher says that today, less than two years after the health clinic was completely destroyed by the Lebanese Army, the rebuilding has begun, and with financial help from organizations such as the UN, Emmaus Björkå and the prize money from the Solstickan Foundation, there is now access to clean water, medicine, equipment and material.

Ascher, who served as a doctor in the camp for a total of 14 months in the 1980s, says: “The war in 2007 was one of the worst battles since the civil war. Many families in the camp are now housed in emergency accommodation and most of them are in cramped conditions. The situation is causing frustration, concern and insecurity for children and adults.” 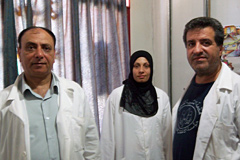 When normal frames of reference, such as family, school and local society no longer function, the social protection network that we are normally surrounded by breaks down. The Al-Shifa health clinic therefore plays a central role in the people’s lives.

“The clinic is here and doctors and nurses are doing as much as they can for all those who need treatment,” Ascher says.

Many refugees have psychiatric problems after having been traumatized by what has happened to their loved ones and to their homes. These experiences manifest themselves in several psychosomatic symptoms.

“Chronic pains, such as headaches and stomach problems, are common,” Ascher says. “In terms of purely physical injuries, burns and shrapnel damage, as well as colds, sore throats and infections are all common too. Doctors also perform basic operations and the clinic offers dentistry as well.”

Problems are a part of the working day and the refugees feel a great amount of hopelessness. Thanks to the Swedish doctors who built up and worked at the clinic in the 1970s and 1980s, and all of those who have worked on a voluntary basis over the years, the clinic’s team is stronger than ever. Two doctors practice, sometimes round the clock, together with two nurses and one assistant. Despite threats and uncertainty from the outside, they refuse to leave the camp and the clinic.

Recently, many donors have made it possible to further develop the clinic and wages can now be paid.

“Money and contributions to finance the operation are of course a constant challenge. Solstickan’s money benefited the clinic at a decisive phase,” says Monzer El-Sabini, coordinator between Swedish aid organizations, the clinic and the refugee camp.
“Solstickan’s contribution was enough to keep the operation going for four months, August until November 2008. There was great uncertainty about the clinic’s future financing. Now it is solved and it seems to work out for 2009.”

But how maintaining courage and keeping strength up to go on working incessantly? El-Sabini says that the strength comes from the opportunity and freedom to act and do something good.

“Being there and channeling contributions and aid, such as that from Solstickan, and then seeing the result brings motivation. The result means small but still slightly improved living standards. By supporting those who are having difficulty, we create unity. It’s a small contribution, but I think it means a lot. Every individual has a responsibility to make a difference. I want to be able to look myself in the eye and know that I’m doing what I can to be a good human being.”