The Solstickan Foundation has awarded H.M. Queen Silvia this year’s Solstickan Award of 150,000 SEK based on the following rationale “for unique and altruistic action in support of vulnerable children and the aged.” 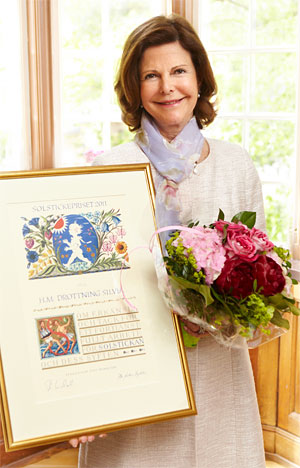 H.M. Queen Silvia has demonstrated a genuine commitment to children and the elderly for many years. In 1999, the Queen took the initiative of founding the World Childhood Foundation (WCF), which promotes improved conditions for children around the world. The foundation supports a substantial number of projects in approximately 15 countries. Today, there are World Childhood Foundations in Sweden, Brazil, Germany and the US.

On the 20th anniversary of the Convention on the Rights of the Child in 2009, H.M. Queen Silvia took the initiative of involving several children’s organizations – the Ombudsman for Children in Sweden, BRIS (Children’s Rights in Society), ECPAT, Save the Children, Plan Sweden, SOS Children’s Villages, UNICEF Sweden and the World Childhood Foundation – in a collaboration to further promote the content of the convention in Sweden. This collaboration led to seminars and inspiration days in Sweden and in the EU.

In the autumn 2010, H.M. Queen Silvia spoke about vulnerable children in today’s society at the World Child & Youth Forum:

“We know that our childhood leaves a strong imprint on our adult life. The more children and young people that grow up in an environment that provides them with support, both regarding successes and setbacks, the greater the possibility that they avoid finding themselves destructively isolated, which sometimes leads to ill-health, substance abuse and criminality. It is my sincere wish that all children should know their true worth. There are children that are unaware and who are unable to like themselves. For these children, it is even more crucial for us adults to pause, actually see them and show them that a hopeful future is waiting for them too.”

She also chairs the Queen Silvia Jubilee Fund for research on children and disability.
The Queen has studied sign language in order to be able to communicate more effectively with the hearing impaired.

Queen Silvia holds honorary positions in a large number of organizations and societies, such as the Swedish Amateur Athletic Association, the Children's Cancer Foundation of Sweden and Save the Children Sweden.

The Solstickan Award has been awarded, every year since 1986, to people who have provided an extraordinary personal input in areas deemed compatible with the Foundation’s charter.

Slightly more than 2.2 MSEK to the foundation

For every product sold under Swedish Match’s Solstickan brand, a portion of sales is donated to the Solstickan Foundation. Since 1936, some 10 billion boxes have been sold in Sweden, entailing more than 100 MSEK for the foundation since its inception. The Annual General Meeting of the foundation was told that the many thousands of small öre increments from the sale of matches in 2010, plus donations, had generated more than 2.2 MSEK.

The following project grants have been awarded:

Research scholarships of 80,000 SEK have been awarded as follows:

Cecilia Elam Edwén, registered physiotherapist, doctoral candidate, for her project Muscle power and postural control compared to clinical tests for balance; do we find the ones at risk for fall.