Solstickan Foundation for the benefit of children and elderly

A share of the sale price of every box of Solstickan-brand matches is allocated to the Solstickan Foundation - for the benefit of children and the elderly. Read about the non-profit association Arken pony farm in Malmö, Sweden, that was granted SEK 20,000 from Solstickan Foundation in order to start a partnership with the aim to stimulate disabled children. 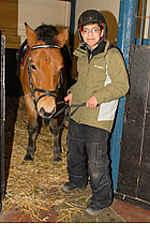 Every year, the Solstickan Foundation awards grants to support organizations that work with disabled or chronically ill children. In 2008, the non-profit association Arken Pony Farm in central Malmö received SEK 20,000 to develop its activities for socially exposed disabled children.

Somewhat unexpectedly, a pony stable with 14 horses, sheep and rabbits can be found at the far end of Folkets Park in Malmö. The stable, enclosed pastures and riding school are surrounded by traditional types of housing. However, Malmö is not displaying its best side this early autumn afternoon with the rain pouring down outside the open stable door and the clouds lying heavy over the city. But inside the stable, it is dry and warm and filled with frantic activity. The horses Saga and Ville are being carefully attended to by Noman and Adam – first using a scrubbing brush, then a softer one. Before the saddle and bridle are put on, mud and stones are scraped off the horses’ hooves.

“Saga is a Norwegian pony,” says Noman gladly.
He and his classmate Adam have come to the association every second Wednesday since the spring and they talk proudly about the stable and their four-footed friends.

The association, which teaches disabled children to ride and take care of the horses, has been in operation for slightly more than a year. It is a partnership between Arken Pony Farm and Class 2-5 D from Örtagård School in the much-discussed Malmö district of Rosengård.

“The grant from Solstickan has made this partnership between the class and the stable possible, and has contributed to further development and inspiration,” says Renate Härkönen, social educationist and riding instructor.

The children are between eight and 11 years old, have autism or autistic traits and are of average intelligence. They go to school but are taught in a specially adapted unit at the school.

“As a rule, you could say that autistic children find social interaction difficult and are hypersensitive since their power of concentration can be limited at times. This means that all new activities require careful preparation and a clear structure.”

‘Arken Pony Farm is a small riding school, which is an advantage. It is well-planned and quiet and the horses are friendly and feel at ease. It is also easier for the children to get to know the personnel and establish a relationship with them.

“It’s incredibly stimulating for these children to visit the stable. They are taught psychomotor skills and communication and learn to cope with and overcome their fears. In addition, the actual environment in a stable with clear and distinct rules and procedures is particularly suitable for children with this type of disability. It invokes a sense of security.”

In the stable, the bridle has been put on and the saddle girths have been tied around the horses’ stomachs. The boys say that you have to be strong to ride.
“The saddle is very heavy to carry,” says Adam.

As soon as the horses are in the ring, the boys climb on to the saddles and grip hold of the reins tightly. From previously barely daring to get close to the horses, the children now trot casually around the ring and steer the much larger and heavier animals over bars and in between cones. You can see the pride in their eyes as the horses obey them when pressed and as they steer the reins. Before their riding lesson, they went through the theory for today’s exercises, which will eventually result in a riding badge.

Practical lessons in the stable are also accompanied by theory in the class room, which is mixed with more traditional subjects. The class has been given bridles and saddles to play with and use in lessons, for example. The pupils play a horse memory game and learn about the animal’s anatomy and colors, and the names of the various parts of the bridles and saddles.

Åsa Kroon, Chairman and stable manager, explained the plans to improve and expand the operations so that more children can benefit from them. The aim is to combine them with the other activities at Arken Pony Farm, which also has a traditional riding school and arranges recreational activities for children.
“It’s so obvious that the children become stronger from being around the animals and other people. They can train their psychomotor skills, communication and social interaction in a natural way. Put simply, we want to use our organization to improve the opportunities of disabled children in society.”

Four öre per matchbox sold go direct to the Solstickan Foundation. The total figure amounts to nearly 2 MSEK per year for charity. Approximately 10 billion boxes have been sold in Sweden since 1936, corresponding to nearly 100 MSEK for the Foundation since it was formed. Dreams come true when öre turn into millions of kronor.