Nicotine, which is present in concentrations of 0.5-1 % in Swedish snus, has well-documented pharmacological effects on the central nervous system. There is, however, no evidence of nicotine per se or any of its metabolites being carcinogenic (Adlkofer et al., 1995). Nicotine is not a risk factor for pulmonary disease as emphysema and is not a risk factor for cardiovascular disease (Lee, P N. Summary of the epidemiological evidence relating snus to health. Regulatory Toxicology and Pharmacology 59 (2011) 197–214). Both the dose and the uptake rate are of importance for understanding the biological effects of nicotine in humans. The amount of nicotine that is absorbed during snus use (nicotine dose) can be quantified by measuring the concentration of nicotine or its metabolites in different body fluids, i.e. blood, saliva and urine. The uptake rate can be estimated by monitoring the increase of the blood nicotine concentration over time. The nicotine uptake from Swedish snus has been described in six scientific publications of different objectives and design.

Steady-state levels of nicotine and cotinine

A comparison of blood nicotine and cotinine levels in a group of snus users and a group of cigarette smokers on a day of normal snus use and smoking, showed that the snus users and cigarette smokers had roughly the same levels of nicotine (37 ng/ml) by the end of the day. The concentration of cotinine was, however, slightly higher in the snus users than in the cigarette smokers (Holm et al., 1992). The same steady-state levels of nicotine and cotinine in blood as those reported by Holm et al. (1992) were found in another study describing the nicotine uptake from Swedish snus (Larsson et al., 1987).In Holm’s study the participants also answered questions about tobacco habits and different measures of subjective nicotine dependence. There was no difference in self-assessed addiction, craving for tobacco or difficulty in giving up between snus users and cigarette smokers (Holm et al., 1992). These results have recently been confirmed in a quit snus use study (Gilljam et al., 2003).

The nicotine uptake has often been estimated by measurement of cotinine in various body fluids. Cotinine, which is the major metabolite (degradation product) of nicotine, is often used as a biomarker for nicotine, since it is more stable, has a longer half-life and is easier to quantify.

Wennmalm et al. (1991) used the excretion of cotinine as a measure of nicotine uptake in a study dealing with the association between the risk of cardiovascular disease and tobacco habits in a group of young men. They concluded that snus users and cigarette smokers had roughly the same nicotine uptake since the level of urinary cotinine was similar.

There is a tendency towards higher cotinine levels in snus users compared to smokers in some studies. This is most likely due to the fact that some nicotine is swallowed and therefore undergoes first pass metabolism to cotinine before reaching the systemic circulation (Holm et al., 1992; Benowitz et al., 1989).

Since humans differ widely with respect to the metabolism of nicotine to cotinine and subsequent elimination of cotinine, the use of cotinine as a marker of nicotine uptake has been questioned. A more reliable estimate of the daily uptake of nicotine from tobacco is obtained if the total amount of nicotine and its metabolites excreted into urine during 24 hours is measured. Pharmacokinetic studies have shown that some 90 % of the nicotine dose is excreted into urine as nicotine and seven of its largest metabolites. The total amount of nicotine excreted in the urine during 24 hours was measured in a group of snus users who were habitual users of a portion-packed snus containing 0.8-0.9 % of nicotine. The daily nicotine uptake was ca 25 mg in this group of snus users, who consumed 16 one-gram pinches of portion-packed snus per day. The same level was found in a group of habitual cigarette smokers, who smoked 18 cigarettes per day (Andersson et al., 1997). 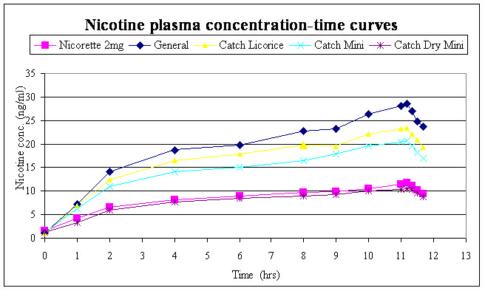