The relationship between the use of Swedish snus and cardiovascular disease has been examined in several studies. Due to the presence of nicotine, which is known to cause acute increase in heart rate and blood pressure, some scientists have assumed that the use of snus can affect the cardiovascular system.

The body of published literature examining the relationship between the use of Swedish snus and various measures of cardiovascular disease includes several descriptive studies, two case-control studies, a prospective cohort study and an experimental study. The outcomes studied include general health status, clinical risk factors for cardiovascular disease, development of atherosclerosis, hypertension, the risk of myocardial infarction and mortality from cardiovascular disease. 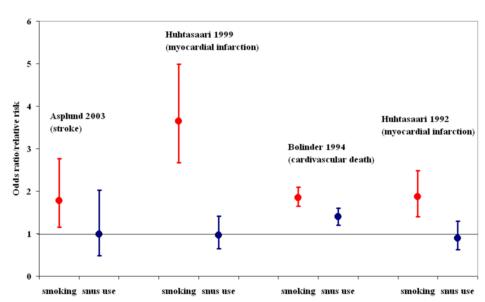 Bolinder and de Faire (1998) studied acute effects of tobacco use on the cardiovascular system in a group of middle aged firefighters. They found that during daytime both snus users and smokers, who were 45 years of age or older, had increased heart rate and increased diastolic blood pressure. During night, when tobacco was not used, heart rate and blood pressure was not elevated.

In another study also comprising the same group of firefighters, Bolinder et al. (1997a) found that the heart rate tended to be 6 beats per minute faster, the systolic blood pressure 10-15 mmHg higher and the diastolic blood pressure 6 mmHg higher in snus users who had recently (<2 hours previously) used snus than in those who had refrained from snus for more than 2 hours before measurement. These temporal relationships between use of snus and effects on blood pressure and heart rate support the view that snus use causes acute cardiovascular effects. Rohani et al. (2004) found an acute impaired ability of the vascular system to dilate in response to increased blood flow in a group of middle-aged snus users.

Two other studies by Eliasson et al. (1991) and Bolinder et al. (1997a) comprising a group of young men and a group of middle aged firefighters, respectively, failed to note differences between snus users and non-tobacco users with respect to blood pressure.

The influence of snus use on the incidence of myocardial infarction was examined in three population based case control studies. Two of these comprised middle aged men in two Northern counties of Sweden (Huhtasaari et al. 1992, 1999). Neither of these two studies found an increased risk of myocardial infarction associated with snus use. The results did not, however, exclude a small or modest detrimental effect of snus use on the risk for sudden death.

In a prospective cohort study comprising a large number of construction workers Bolinder et al. (1994) found an association between snus use and increased risk of death from all cardiovascular diseases for the age group 35-45 years but not for the age group 55-65 years.